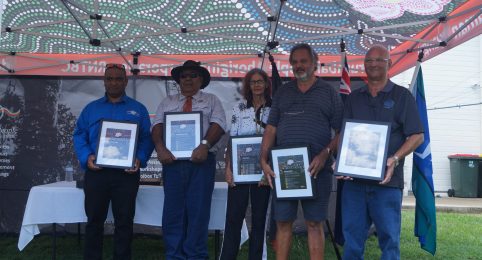 In line with the Federal Court’s Native Title Consent Determination handed down on June 2016, deeds of grant for Aboriginal freehold land over approximately 409 hectares were handed over to the DPAC RNTBC. The deeds of grant were presented to the DPAC RNTBC Directors on 11 February in a Land handover ceremony instigated by the Land and Native Title Services, Lands Division of the Department of Natural Resources, Mines and Energy. The parcels of land are located near Mount Chalmers, Mount Archer and Thompson Point.The land handover was a huge outcome which was the result of many years of hard work a determination and some frustration from the Darumbal Board, Darumbal people, Darumbal staff and associates. The land handed over was part of the Native Title Determination process and DPAC RNTBC are now seeing some success from the years of struggling to gain recognition as traditional owners of the Darumbal Native Title Area. It has been a long process and many people ave helped to get to this stage. Some of the work including;

– getting Darumbal recognition from the State as the traditional owners of the native titlearea;

– researching the unallocated state land lots within the Native Title Determination area- the any meetings and many approvals needed;

– the lots being visited and inspected by the DPAC RNTBC to check no weed or fencing issues before the handover took place.

Darumbal will continue to seek handback of unallocated State Land as Aboriginal Freehold.