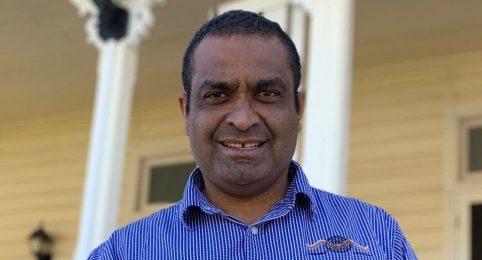 Malcolm Mann is a Darumbal Traditional Owner, one of six Directors on the Darumbal People Aboriginal Corporation RNTBC and he lives and works in his country.  Malcolm is the new Darumbal Business Development Manager and is very excited to be working in this new space for Darumbal. Mal grew up on the Styx River in a small-town Ogmore and later places like Carmila, and then in NSW Griffith, Bourke and Wilcannia and Rockhampton. Much of Mal’s passions comes from his upbringing by his father and grandfather, hunting, fishing camping and a love for the outdoors which saw him work through a number of labouring jobs such as Queensland Rail, Meatworks, Stockwork and lead him to being a trainee Ranger through Darumbal Noolar Murree Aboriginal Corporation 20 years ago and mentored by his Uncle Billy Mann.

After completing his Ranger Traineeship, he was employed by Queensland Parks & Wildlife Service as a Marine Parks Ranger. During his time as a Marine Parks Ranger he attained a Bachelor of Environmental Science through CQUniversity and then secured a position as a Senior Project Manager with the Indigenous Partnerships team Great Barrier Reef Marine Park Authority. Recently Mal was employed through CQUniversity for over five years in Indigenous school outreach where he designed and facilitated the BROLGA Week Program and the BROLGA Junior Rangers which is now nested with him at DPAC. Since 2015 to the present Mal has been advocating for Great Barrier Reef Traditional Owners on a number of Indigenous advisory groups in relation to the Great Barrier Reef World Heritage Area and understands that in order to get the best outcome for our people we need to work together with everyone.

Darumbal Enterprises Management are excited to have Malcolm join the Team.